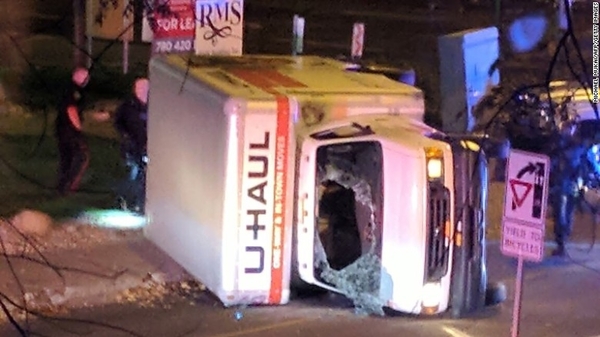 Edmonton has been hit by a terrorist attack.

A 30-year-old suspect is in custody after running over a police officer, stabbing the officer numerous times, and deliberately targeting pedestrians while fleeing police.

An ISIS flag was found in the U-Haul truck used by the attacker, and police are investigating the attack as an act of terrorism.

As reported by the Edmonton Journal, The attack began around 8:15 pm, when a man rammed a Chevy Malibu into a police officer, sending him 15 feet through the air. The attacker then stabbed the police officer multiple times with a knife.

The officer is said to be in “not critical condition,” giving him a good chance to pull through.

Justin Trudeau has released a statement on the Edmonton terror attack. The statement can be read below:

“The Government of Canada and Canadians stand with the people of Edmonton after the terrorist attack on Saturday that sent an Edmonton Police Service officer to hospital and injured a number of innocent people who were out to cheer on their football team and to enjoy an evening in their city. I am deeply concerned and outraged by this tragedy