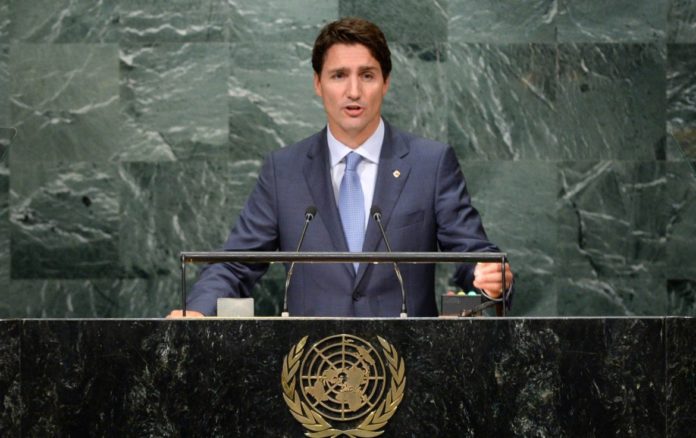 It was a bizarre “performance” … even for a Prime Minister with a penchant for show-biz-style grandstanding, peripatetic photo bombing and, of course, scads of selfies.

There was Canada’s LEADER,  Justin Trudeau, standing before a world  forum … trying to draw the spot light to himself again … by doing something no other leader … Canadian or foreign has ever done at the UN …. attacking his OWN country!

It was a vain, embarrassing spectacle … that didn’t work.

Trudeau’s performance, to a more than half empty assembly hall,  drew little attention abroad … and if it was meant to show Canada has the IDEAS, SOLUTIONS or LEADERSHIP credentials worthy of a seat on the UN Security Council … it failed miserably.

Trudeau didn’t even mention the worst crises and conflicts facing the world and the UN …. let alone propose ANY meaningful Canadian PROPOSALS to even assist, let alone solve them:  the 400,000 Rohingya from Myanmar suffering in the muddy fields of Bangladesh;  the millions of refugees/migrants plaguing Europe/Mid East/Africa … and the West; any recommendations on how the hate/conflicts/corruption that created their misery could/should be dealt with; how the growing gap, increasing hostility between Russia and the West could be reversed; how the wars in Syria/Afghanistan/Ukraine/Sudan/Middle East/North Korea  could/should be mitigated by the UN.

Our Prime Minister could have been a STATESMAN …. following in the well-respected and effective leader’s footsteps of Canada’s Lester Pearson … laying out REAL ideas, REAL proposals, REAL offers to mediate and a REAL commitment from Canada to participate in solutions that would have captured the attention of many nations …and the UN’s Security Council.

Instead, Canada’s leader used almost ALL of his time before the World body attacking his own country: denouncing its treatment of indigenous people; enunciating the negative aspects of our colonial history; depicting our internal conflicts and human rights challenges. To what purpose???

As if such confessions and a pledge to seek solutions will have ANY effect on the laws/customs/civil and human rights of other UN members … like Saudi Arabia, Russia , Syria, China, Venezuela, Yemen,  Iran North Korea etc.

Maybe our Prime Minister believes the way to a temporary and effectively powerless Security Council seat is to show Canada has NO real principled ideas, solutions or proposals to push of its own  … so we could easily be swayed, cajoled and convinced to vote with and by ANY/ALL permanent Council members.

Just give me a Security Council seat … PLEASE!!!!

If any major world leaders or nations were impressed by his “stand up” act at the UN … they have not said so.

But then again, when it comes to Trudeau and the UN … it’s all about ego …  NOT about repairing the wold.