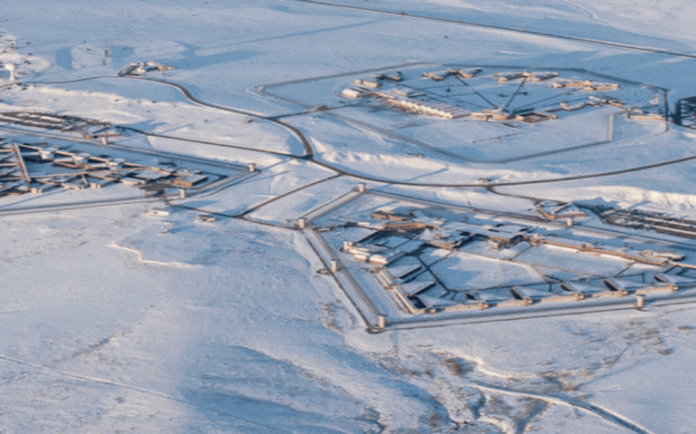 Here is a true-life account of what it’s like to survive in one of the world’s toughest penitentiaries — Florence ADX, Colorado, USA. The ‘Supermax.’

Oklahoma born-and-raised McNair — a one-time killer, three-time escapee — was captured by the RCMP in Campbellton, New Brunswick in October 2007.

The former U.S. Air Force Sergeant had been on the run for a year and a half after a spectacular escape from a prison in the southern States.

Richard McNair’s account of his time in the Supermax forms Chapter 24 of my book, The Man Who Mailed Himself Out of Jail. I suspect few can chronicle life at ADX Florence better than federal inmate #13829.045.

If you’re into true crime, The Man Who Mailed Himself Out of Jail is available on Amazon.com … and Amazon.ca. Click on the link for Amazonbooks at the very end of this post.

McNair’s quotes — in bold italics — are drawn from his 300+ letters, all written by hand from his solitary confinement cell in the most secure part of ADX Florence — the Control Unit.

The correspondence was written over a five-year-period.

McNair was confined to his cell 23-hours a day with no physical contact with other inmates.

Through his own words, one gets a glimpse of what life is really like at the ‘Alcatraz of the Rockies.’

And it ain’t pretty …

[Credit for that cool aerial shot of ADX Florence goes to The New York Times.]

On the 18th of April 2008, the freshly-captured prisoner who had been featured a dozen times on the TV show America’s Most Wanted was on the move again. Handcuffed and shackled, Richard Lee McNair sat on a Bureau of Prisons bus that lumbered out of United States Penitentiary [USP] Pollock, Louisiana.

His destination, a thousand miles distant, was yet another Big House — from which there would be no escape.

The high-profile, high-risk inmate was being transferred to the sleepy Southern Colorado foothills town of Florence, home of the most secure penitentiary in the Bureau of Prisons system: ADX Florence.

The joint is officially known as the Administrative Maximum Facility, unofficially as the Supermax — and ‘Alcatraz of the Rockies.’ An American Gulag, if you will.

No one has ever escaped from ADX Florence. Of the thousands of men who’ve been incarcerated there, only a handful have left before their release date and all the same way — on a gurney, covered by a white sheet.

McNair was headed to the Federal correctional complex at the southern edge of Florence, just off Highway 67. The sprawling compound — some of it underground — is a collection of several penitentiaries, each with a different level of security.

When McNair stepped off the bus he had with him a 6-page document from USP Pollock outlining where he was headed at ADX Florence: general population. In spite of the paperwork, the con was promptly marched to the Special Handling Unit, known in prison speak simply as the SHU. Segregation.

A sudden change of plans. It was looking like some faceless bureaucrat had quietly pulled off a switcheroo.

Back to the document. There was a check mark beside the box that read: “Your conduct creates a risk to institution security and good order, poses a risk to the safety of staff, inmates or others, or to public safety.”

A few months later, McNair was in for a surprise when he was marched to a single-person cell in a dreaded part of the joint known as the Control Unit. That’s high-end solitary confinement.

The prison complex at Florence was opened in 1994 at a cost of 60 million dollars. Cameras, pressure pads, laser beams and attack dogs warn guards if anything or anyone moves between its walls and the 12-foot high fence that surrounds the complex. The fence is crowned with loops of shiny razor wire that glisten in the bright Colorado sun.

The Supermax is home to about 500 prisoners, all considered to be the most dangerous. Those in need of the tightest control are in the ‘Control Unit.’

Through hundreds of letters written over five years, Richard McNair, federal prisoner #13829.045, provides a rare glimpse into life at the ‘Alcatraz of the Rockies,’ particularly in the Control Unit.

“The Control Unit has an evil vibe to it. Byron, it is difficult to explain. But just a bad vibe …

“Everything is negative. Not the staff, but the inmates, etc.”

Some things about the ultra high-security penitentiary really get under Richard McNair’s skin, as expected, but surprisingly it’s not all negative. All things considered, there’s no doubt that life in the Control Unit at ADX Florence is a struggle. A bitch.

“It is 09:33 and I look out my window on a sunny day. Not a cloud. Guess what? The huge security lights are on again!

“They sprayed the weeds in the little concrete area outside my window. So the weeds are wilting. How the weeds are blowing is how I know if the wind is blowing hard. Really does not matter in warm weather, but in the winter — important.

“How do I know the temperature outside, you ask? I check the local country music station out of Cañon City [Colorado] and yes, I ask the staff.

“Most of the time they say, ‘Oh hell it is cold out there, you don’t want to go out.’ Of course, they are just joking. The fewer inmates who go out, the sooner they can do their chores.”

A prisoner in the Control Unit is confined to a cinder block cell roughly 7 by 12 feet, about the size of the average bathroom. The cell has a shower, toilet, metal mirror, light and [up until the spring of 2013] a combo radio and a 13-inch black and white television.

The only way to hear any sound from the TV or radio is to use headphones.

Desk, stool, and bed are all poured from concrete. Read: indestructible. There is a bunk — and a mat — but no mattress. Inmates learn not to plop themselves down on the bed because on either side of the mat protrude three steel posts about the height of the mat — tie-downs for the legs, wrist and head region. The posts are used to strap down unruly prisoners.

Unlike other pens, inmates in the Control Unit do not meet in a common dining room. Meals are delivered to their cells three times a day. Room service, if you will.

“IT BREAKS YOUR MIND”

Prisoners cannot socialize. That means they can’t wander freely in an exercise yard, as in some joints, and so they’re stuck in a cell nearly 23 hours a day. Long-term lockdown. The solitary confinement has been compared to ‘dying every single day.’

In an interview with CBS, a former prisoner at ADX Florence says the Supermax is unlike any other prison. Garret Linderman describes the segregation as the “brutality of isolation.” “It destroys the human spirit,” he says, “breaks down the human psyche. It breaks your mind.”

It hasn’t broken McNair’s mind, though it would be fair to say it almost did a number of times.

According to McNair, the isolation has sure done a number on some of the cons.

“It is so sad. I have seen and heard one of the guys deteriorate mentally. He went from a somewhat functioning individual to hearing voices. Paranoia. I’ll write about it on a separate sheet in case it is considered a security issue.”

[Turns out, McNair’s letter was not censored by the guards.]

“I’ve seen individuals deteriorate before — but not this drastic. His physical health is bad also. He will scream about people talking about him. No one is. At least they were not until he started spinning out. Sad, but what can one do? He is one of those ‘tuff guy’ white supremacists. I absolutely cannot stand him.”

Like other joints, ADX Florence has daily, stand-up counts — at any hour.

Cells in the Supermax do not have windows, at least not as we know them. A 4-inch slit in the thick concrete wall allows a small amount of natural light to enter. If the sky is clear and it’s the right time of day, prisoners are able to feel the warm rays of the sun for a few minutes.

One item not stocked in the prison canteen is suntan lotion.

“I’m sitting here looking out the window at a very deceiving scene: sun shining, bright day — but bitter cold. Have not gone outside for recreation for two days.

“The wind was blowing good yesterday and the temperature was seven degrees; no idea what the windchill was. Did some exercising in the cell.”

In an interview with CBS, Robert Hood, former Warden at ADX Florence, described the Supermax as a “clean version of hell.”

Clean, yes. But quiet? Hell no! At the Supermax, cons can’t get together and talk, and so communication amongst themselves is reduced to shouting down air vents and into sink drains. The yelling is muffled, sure, but it’s still a human voice.

For prisoners not part of the banter, the stifled conversation is an annoyance that digresses to a maddening racket which can drag on for hours. There is little they can do except either politely ask their neighbors to keep the noise down, or reach for the ear plugs and headphones and pray they’ll shut up.

The second option doesn’t work either. The ear plugs and headphones are next to worthless.

“The young ones are screaming. There be football on. If the other ones don’t acknowledge one of them the one wanting to holler will start screaming, “Hey! Hey!” over and over until he gets his turn to holler. Just crazy. They have been going at it for two days now.

Two hollering their chess moves for hour after hour. Another is whistling.

“Another is hollering non-stop about getting out. I can’t stand the guy, but he is going home from here. No chance to decompress.

“This is a train wreck waiting to happen.”

“Just one punk can make many miserable. With most guys, you can ask to hold it down and they comply. These two only get louder. In spite of the earplugs and headphones, I couldn’t hold a thought. The past two days have been real bad.

“Don’t know what is in the water, but these idiots have been screaming at one another and it broke down into race. Some nasty, nasty stuff. There is a reason for a Supermax.

“There is no way two men can have anything to holler about for five or six hours straight. Okay, I don’t know if they are in love, but I never talked to a woman as much as these two yell back and forth.

“Lord help us if a rap song they like comes on …”