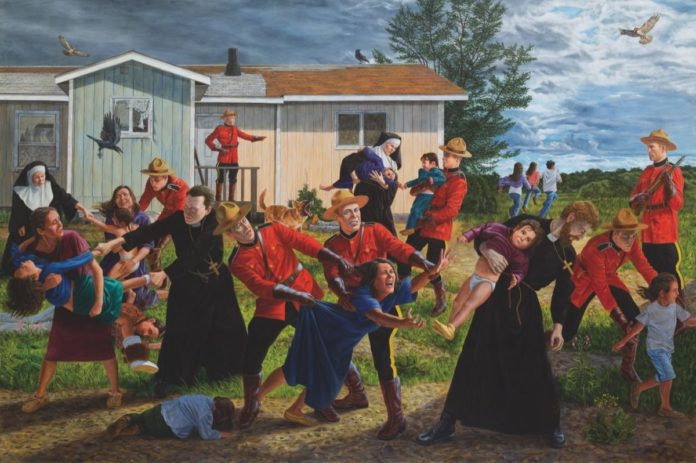 (The Scream, on the cover, The Subjugation of Truth, by Kent Monkman)

This year, the federal government plans to spend half a billion dollars on events marking Canada’s 150th anniversary, prompting a great deal of debate about its historical treatment of Indigenous peoples. The majority of Canadians don’t have all the facts about that, while First Nations continue to live the crisis-level effects of that legacy. Perhaps Canada should cancel its celebrations and undertake the hard work necessary to make amends.

For many Indigenous peoples on Turtle Island (North America), it’s difficult to imagine Prime Minister Justin Trudeau – who has said that “no relationship is more important to Canada than the one with Indigenous peoples” – celebrating the last 150 years of brutal colonization and the foundation of what is now known as Canada.

This year, the federal government plans to spend half a billion dollars on events marking Canada’s 150th anniversary. Meanwhile, essential social services for First Nations people to alleviate crisis-level socio-economic conditions go chronically underfunded. Not only is Canada refusing to share the bounty of its own piracy; it’s using that same bounty to celebrate its good fortune. Arguably, every firework, hot dog and piece of birthday cake in Canada’s 150th celebration will be paid for by the genocide of Indigenous peoples and cultures.

Many places are struggling with the nation’s genocidal origins.

In Halifax, the school board voted to change the name of Cornwallis Junior High because its namesake, Edward Cornwallis, was responsible for putting bounties on the scalps of Mi’kmaw people, causing many deaths.

Likewise, in Toronto, Ryerson University has come under scrutiny for its namesake, Egerton Ryerson, a strong supporter of residential schools, where thousands of Indigenous children died violent, torturous deaths.

Even the “Famous Five” women long celebrated as champions of women’s rights have had their hero status questioned because of their support for sterilization of Indigenous women. Celebrating genocide is not what most would consider a modern Canadian value.

While use of the term “genocide” to describe Canada’s treatment of Indigenous peoples has created a great deal of debate, there has always been a recognition that, at minimum, Canada was guilty of “cultural genocide,” even if individuals couldn’t bring themselves to accept more sinister intentions.

Former prime minister Paul Martin told the Truth and Reconciliation Commission (TRC) that it was time to call the residential schools policy what it was: “cultural genocide.”

While these comments were made before the TRC report was tabled in late 2015, they did raise questions in the public sphere about how to recognize genocide when it’s not part of something like the Holocaust or the war in Rwanda.

Despite the sensitive nature of making the claim of genocide, the TRC went further after investigating the historical record, stating that the totality of policies toward Indigenous peoples amounted to cultural, biological and physical genocide.