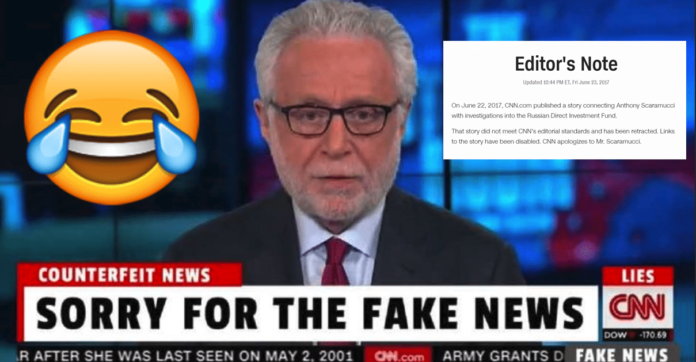 Fake News CNN was forced not only to remove a fake news story that they made up but was forced to apologize to the individual that they smeared as they tried desperately to connect Trump associates to “Russia.”

The Clinton News Network (CNN) issued this statement in regards to their fake news report:

That story did not meet CNN’s editorial standards and has been retracted. Links to the story have been disabled. CNN apologizes to Mr. Scaramucci.

Because it is important to document the lies that come from CNN, an online archive was made of their original report.

Here is the entire fake news report that was written by CNN that they have now removed from their website:

The source said the Senate intelligence committee is investigating the Russian fund in connection with its examination of discussions between White House adviser Jared Kushner and the head of a prominent Russian bank. The bank, Vnesheconombank, or VEB, oversees the fund, which has ties to several Trump advisers. Both the bank and the fund have been covered since 2014 by sanctions restricting U.S. business dealings.

Separately, the Treasury Department has been looking into the Jan. 16 meeting between the fund’s chief executive and Anthony Scaramucci, a member of the transition team’s executive committee and a fundraiser and adviser for Trump’s presidential campaign, according to a Jan. 30 letter from Treasury Secretary Steven Mnuchin.

The inquiries draw attention to the Russian Direct Investment Fund, a government investment arm that has helped top U.S. private-equity firms invest in Russia and that was advised by Stephen Schwarzman, who is now chairman of Trump’s Strategic and Policy Forum, an advisory group of business leaders.

Schwarzman, chief executive officer of Blackstone Group, was named in 2011 to the fund’s International Advisory Board along with other leaders of major equity companies and sovereigh-wealth funds who reviewed the fund’s operations, plans and potential investments. Schwarzman declined to comment. A source close to him said Schwarzman has not spoken to anyone on the fund “for some time.”