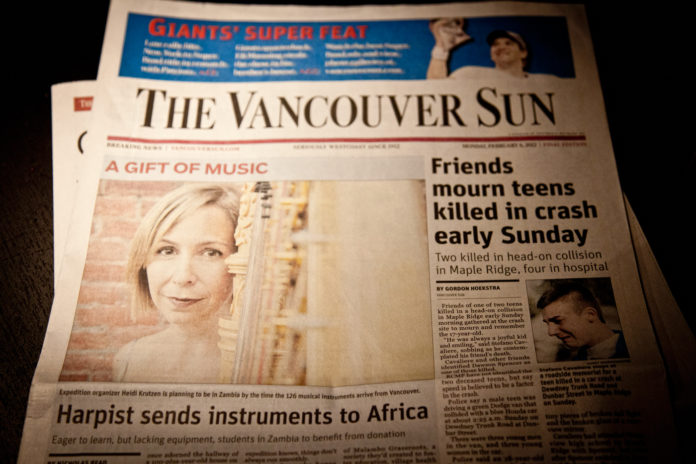 There’s a civic disaster brewing in Canada with its news industry. The public doesn’t understand it. Policy makers dare not speak its name.

Many close observers think it is quite likely Postmedia will go into bankruptcy, or some kind of bankruptcy protection, within the next year — if not sooner. In the meantime, the chain is stripping its newsrooms of reporters and editors.

This week, the Columbia Journalism Review remarked that the failure of Postmedia would be the equivalent of the top three U.S. newspaper chains going down at once. Outside of Toronto and Winnipeg, Postmedia controls all the paid daily newspapers in the ten largest English markets, and it controls scores of titles in smaller communities.

Yet in this week’s report on media from the House of Commons heritage committee, there was no direct reference to this looming crisis. Similarly, the recent ‘Shattered Mirror’ report by the Public Policy Forum, commissioned by the government in an effort to figure out what to do, made only oblique references to the dying elephant in the middle of the room.

A poll conducted for the PPF report by Earnscliffe Strategy Group suggested that three-quarters of Canadians think — correctly, in my view — that democracy would be threatened if news outlets were no longer able “to fulfill their civic news function.” Yet the easy access we all now have to news online has convinced most of us that we are getting more news than ever before. The fact is Canadian media outlets have shed thousands of workers in recent years.

Many Canadians, the polling suggests, don’t think the loss of local newspapers and broadcast news would affect them. They think online and social media would pick up the slack. Those people are wrong — and they’re wrong in part because few people outside the industry understand how central newspapers are to the local news ecosystem.

When I was a local CBC television reporter in Edmonton at the start of my career, the news director sometimes demanded in exasperation at the morning editorial meeting: “Does anyone have a story idea that isn’t on the front page of the [Edmonton] Journal?”

He may have been exaggerating, but he captured a truth: Most local journalism in any other medium is to some extent parasitic on newspapers.

Even in these straitened times, a metropolitan broadsheet will have several times the number of reporters of any TV or radio station. That means newspaper reporters are much more likely to work steadily at a beat, day after day, whether it is city hall, cops and crime, or education. And it is in the course of that steady work that reporters are most likely to unearth new information and identify new stories.