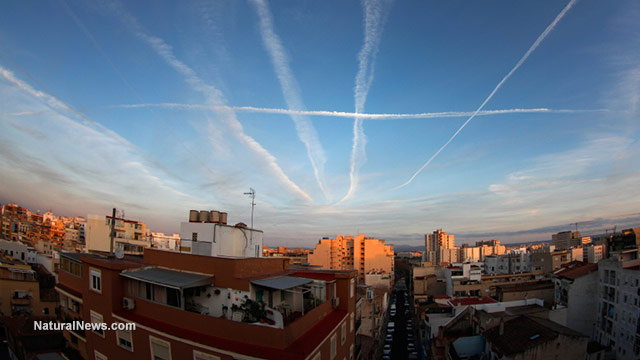 by Mike Adams, the Health Ranger

(NaturalNews) America is being doused every minute of every day with the toxic heavy metal lead as it is burned in “avgas” — aviation gas, the fuel that powers most piston-driven aircraft (i.e. anything with a propeller). A grand total of 571 tons of lead are dumped each year into the air over our heads from aircraft alone, according to the U.S. Environmental Protection Agency. (1)

According to a scientific paper titled, “Lead and Halogen Contamination from Aviation Fuel Additives at Brackett Airfield,” (2) X-Ray Fluorescence instrumentation was used to analyze lead, chlorine and bromine content in avgas liquids. The tests showed avgas contains the following:

Lead is a highly toxic heavy metals that causes bone diseases, brain damage and cancer. Chlorine is a highly-reactive chemical with powerful oxidative properties. The fact that both are being sprayed daily into the air above America is inexcusable.

964 tons of lead released into the air (from all sources)

How much lead is being “chemtrailed” across America due to aviation fuel? According to General Aviation News (3), about 681,000 gallons of avgas were burned each day in 2013.

Avgas weighs approximately 6 lbs per gallon, meaning over 4 million pounds of avgas is burned each day, or over 1.8 million kg of avgas.

If lead is 48 ppm in avgas, that means each kg of avgas contains 48 mg of lead. Multiplied by the 1.8 million kg of avgas burned each day, this means avgas fuel is emitting 86.4 kg of lead PER DAY in the skies over our heads. Over a year, that’s 31,536 kg of lead dumped directly into our air, and that lead falls onto our farming soils, forests, lakes, rivers, streams, oceans, children’s playgrounds, cattle ranches, and so on.

The National Emissions Inventory says that lead emissions are even higher than what I’ve calculated here. “Piston-engine aircraft are the chief source of lead emissions in the United States, emitting 57% of the 964 tons of lead put into the air in 2008, according to the most recent figures from the National Emissions Inventory,” reports the NIH. (4)