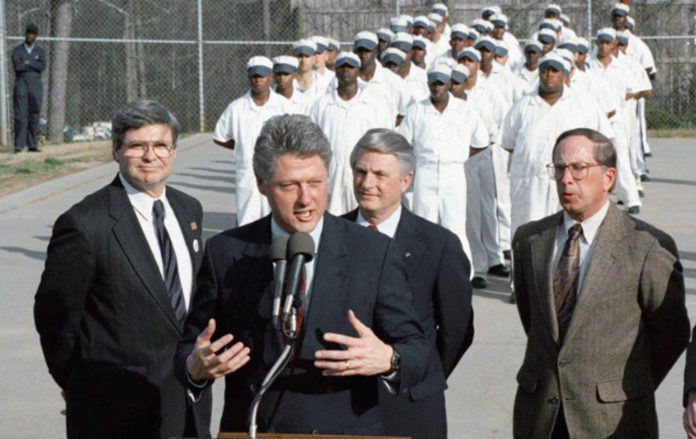 But the prison labor system is also rotten to the core…

Contrary to popular understanding, the Thirteenth Amendment to the United States Constitution did not prohibit slavery. The text makes it clear:

Neither slavery nor involuntary servitude, except as a punishment for crime whereof the party shall have been duly convicted, shall exist within the United States, or any place subject to their jurisdiction.

The nifty little loophole of that word “except” means that slavery isn’t actually banned outright; someone simply has to be convicted of a crime in order to be enslaved. This gave Southern states a welcome free hand in re-establishing forced servitude for African Americans in the years after Reconstruction collapsed; as Douglas Blackmon documents in Slavery By Another Name, the Jim Crow era was in many places characterized by a mass re-enslavement process, whereby criminal laws were devised that allowed states and municipalities to put black people in chains again. Today, forced labor among African Americans persists; in Louisiana, for example, felons are sentenced to “hard labor” as well as prison time, and inmates at the infamous Angola prison still pick cotton at gunpoint.

The prison labor system in the United States has long been an unacknowledged scandal. It’s quite plainly a form of slavery. The Thirteenth Amendment even admits as much: it doesn’t say that when you’re forced to work for being convicted of a crime, that isn’t slavery. It says that slavery is legal if it is imposed as part of a conviction for a crime. All manner of people benefit from the system; as Mother Joneshas reported, Congress actually incentivized private companies to use inmate labor, and the incarcerated now produce everything from bedding to eyeglasses. They even staff call centers, with a company called UNICOR encouraging companies to “smart-source” their call-center work to prisoners rather than sending it overseas.

But two possibly unexpected beneficiaries of the contemporary prison slavery system were none other than Bill and Hillary Clinton, who during their time at the Arkansas governor’s mansion in the 1980’s used inmates to perform various household tasks in order to “keep costs down.” Hillary Clinton wrote of the practice openly and without any apparent sense of moral conflict.

The Clintons’ practice has gotten some renewed attention over the last day, with the rediscovery of the relevant passage from It Takes a Village. Last year I wrote a bit about Hillary’s admission in my book Superpredator: Bill Clinton’s Use and Abuse of Black America:

Clinton was, however, generous enough to allow inmates from Arkansas prisons to work as unpaid servants in the Governor’s Mansion. In It Takes a Village, Hillary Clinton writes that the residence was staffed with “African-American men in their thirties,” since “using prison labor at the governor’s mansion was a longstanding tradition, which kept down costs.” It is unclear just how longstanding the tradition of having chained black laborers brought to work as maids and gardeners had been. But one has no doubt that as the white residents of a mansion staffed with unpaid blacks, the Clintons were continuing a certain historic Southern practice. (Hillary Clinton did note, however, that she and Bill were sure not to show undue lenience to the sla…servants, writing that “[w]e enforced rules strictly and sent back to prison any inmate who broke a rule.”