The video has received over 1,000 Views through Puget Sound Radio and Easton Spectator… 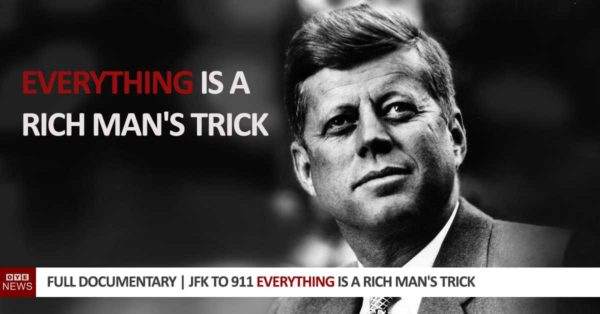 Dear Mr Easton
I am Francis Richard Conolly, the Writer and Director of the cult Youtube movie  “JFK to 911 Everything Is A Rich Man’s Trick”  which you gave such a positive review;  and then posted on Facebook.  I have only just learned about this because I didn’t use social media until very recently.
.
I am having to learn the ropes now because I am trying to crowd fund a Part 2 of my movie with indiegogo and the campaign starts on May 17th.  I would like to begin by thanking you for this, and also to say I don’t know how to thank you for the utterly staggering interview you placed on your website with Ronald Bernard. What a find. That one discussion pretty much  proves everything I have been trying to tell people for decades is all true.
.
Below is the official link to my indiegogo funding page.  Could you please see what you think of it?
(  all feedback is welcome )  and show it to your staff and your colleagues?  I was hoping you could then use the
influence of your Easton Spectator to spread this news as far and wide as possible?  We certainly appear to be fighting for the same things; and I firmly believe you are one of those media entrepreneurs who already knows that my work really has made a difference already in this fight.  Many are they who claim I have “woken up America”  on my own.

Watch FULL Version of JFK to 911, A Rich Man’s Trick, Part One HERE