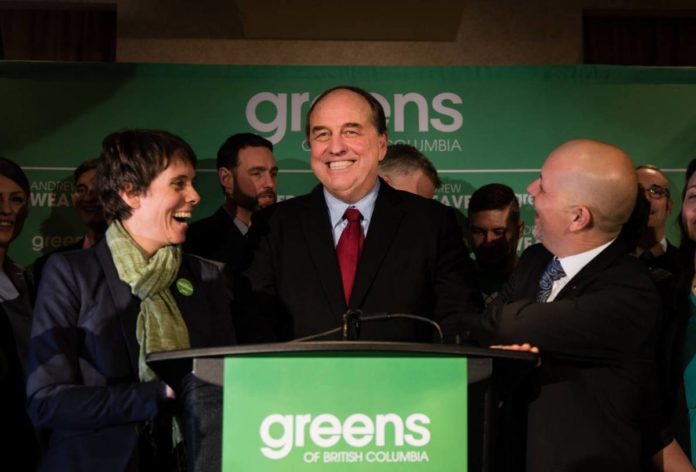 Platforms, policies and promises all count for nothing in practical terms unless backed by POWER.

And if the Greens truly believe they can one day achieve POWER in British Columbia, their best path …. if a minority government situation does present itself in BC after the final votes are in … would be to support a Liberal government.

I know! I know! There are many more NDP policies that come closer to those of the Greens than do those of the Liberals. In fact, many voters see little substantive differences on several issues between the two.

And that’s EXACTLY why the Greens should NOT prop up the NDP and give that party a chance to government effectively.  Even if the NDP agreed to adopt/co-operate/accept some Green policies, it would still be an NDP  government in power, taking any credit and impressing the voters … maybe even enough to win a majority government within several months.

How would that help the Greens?????

In fact, if the Greens’ dream of  ultimately becoming government … they should FIRST aim at becoming the Official Opposition, giving them much more exposure than  just being a rump backing up the NDP.

And backing a Liberal Christy Clark minority government ….  NEEDING the support of the GREENS just to stay alive … would give leader Andrew Weaver a better chance (don’t call it blackmail) to achieve distinctly identifiable GREEN results, while awarding him a bigger soapbox and almost daily news coverage …. and a chance for the Greens to build the public perception that they indeed could handle the role of Official Opposition…and, yes, have the maturity/experience to even govern.

THAT should be the Greens’ next practical strategy … to become Official Opposition, replacing the NDP as the left progressive activist alternative to the Liberals.

And they won’t do that … by helping the NDP achieve or stay in power.