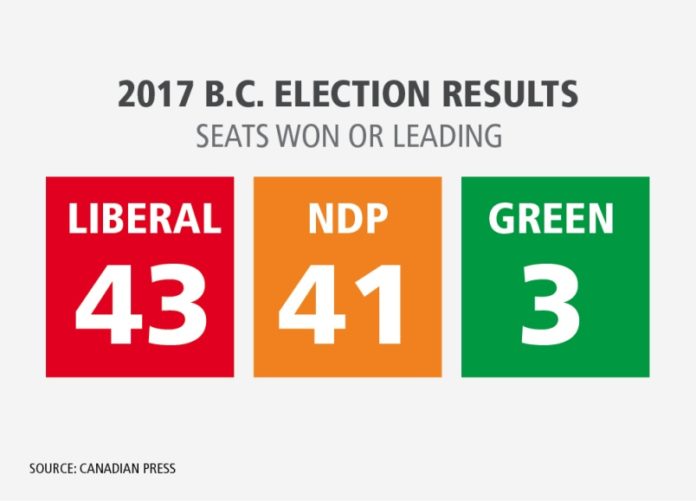 It could be weeks before we REALLY know FOR SURE which party forms government in BC.  With all the recounts and absentee vote results still to come …. the FINAL seat division between the Liberals and NDP are too close to call

But regardless of the final tallies for the Liberals and NDP, the only ones who could and should be celebrating are the Greens.

The Liberals, so far, are holding 43 seats …down four and the NDP 41 …up six.  A majority government would require a minimum 44 seats in the 87-seat legislature … and don’t forget, one seat is compromised once the Speaker is elected.

With three seats, Green Leader Andrew Weaver could literally be a King or Queen maker … deciding which of the other two parties to prop up under a minority government situation.  And what makes that all the more interesting is that the Greens will have achieved that ultimate power with only about 17% of the actual vote!

Just a few weeks ago, we on here were among the first to sound the alarm bells that the way the Greens and Andrew Weaver were pulling in new support, they could be the big spoilers in the May 9 election, especially for the NDP.  You can review what we all said here: http://harveyoberfeld.ca/blog/this-time-a-green-vote-really-is-a-liberal-vote/

Indeed, those Green votes could be the ones that will keep the Liberals in power …in a minority government.

Remember, although the NDP/Greens may seem closer ideologically on many issues … Weaver has publicly noted he has in the past been able to have civilized conversations with Liberal leader Christy Clark , he found NDP leader John Horgan shouts a lot.   That temper could do Horgan/NDP in!

And remember BC political history: the “BC Liberals” are already coalition of Socreds, Conservatives and even true Liberals … very ideologically malleable … so adding a few Green ideas to stay in power would not be too difficult.

No doubt there will be much pacing back and forth, strategizing,  possibly even discussions/negotiating …in public and in private … over the next few days.

And what I find particularly intriguing will be the impact of the advance/absentee vote on this election’s results.

In my May 1 blog, ( http://harveyoberfeld.ca/blog/election-17-signs-of-higher-interest-and-higher-turnout/ )  I celebrated the high ratings of those who tuned in the TV Leaders’ Debate and the high turnout in the first of the advance polls.

Here’s what I wrote about the advance poll turnout last week:  “I think it’s great news and shows that maybe, just maybe, people generally, including those 25 to 40, are starting to realize politics and parties and promises and policies ….. and  THEIR participation ….. do affect their lives.”

But who would have guessed that those who voted early or using absentee ballots could actually determine the final outcome of which party and/or coalition will hold power and run the province until the next election!

Those of us who are politically interested and/or truly appreciate the importance of democracy have often appealed to those who rarely or never vote to PLEASE do so!

Many, though, think their single vote won’t really matter.

THIS BC election has proved them WRONG in many ridings!!!!

In several communities where the eligible voters total in the several thousands … the winner was … or will be …  decided by very, very few votes.  Imagine the possibilities if another few hundred had shown up in each those: possibly enough to swing the ENTIRE election result!

And we will likely not have to wait four years to do it again.