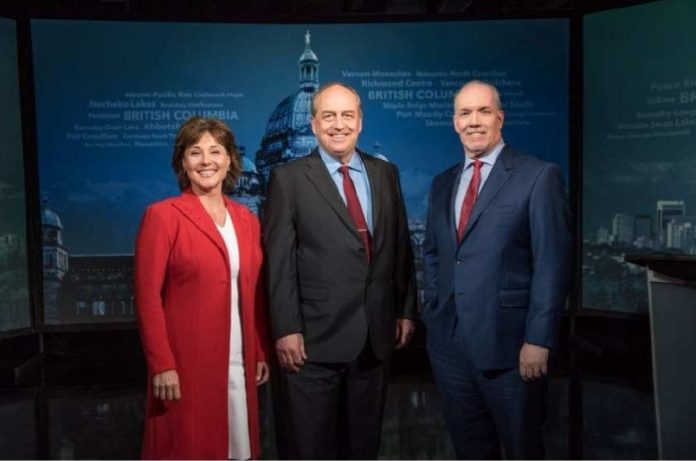 The gloves were off in the televised BC election debate Wednesday night …and Green leader Andrew Weaver pummelled NDP leader John Horgan in several rounds.

Almost to the point, at times, I wanted the referee to step in.

Because in some exchanges, not just with Horgan but Liberal leader Christy Clark as well, Weaver went too far … repeatedly refusing to allow his opponents to make their points, to the point of rudeness and bullying …   not actually a good thing in political debate.

But if anyone did not know WHO the leader of the Greens was … they know now.

Horgan had better hope the viewers don’t just base their voting intentions on his performance in the debate.

The NDP leader often seemed uncomfortable, nervous or rattled at times … and even  when citing and/or reciting his party’s platform and promises, did not project a commanding presence, credibility or showed much confidence as a potential premier.

But he did score points, jabbing at Clark on the Liberals dipping their hands so often into taxpayers’ pockets with ever-rising fees and services,  on corporate donations,  tax breaks for the rich, child poverty rates and for never apologizing for stealing away educational spending/services/class sizes from “an entire generation” until the Supreme Court of Canada ruled against the government and forced restoration of the funding.

Clark counter-punched with the revelations about U.S. union funding of NDP campaign workers, its  opposition to several major development projects, while touting statistics on BC job and economic growth and BC’s top rankings in worldwide educational assessments.

And she particularly scored, I thought, in taking advantage of US President Donald Trump’s attacks on Canadian trade to suggest to voters her leadership ability, strength and experience would best suit BC in the fight ahead.

Her supporters will feel vindicated and confident that she held her own. Although she seemed to me to be a bit more bland than in previous election debates.

Weaver and the Greens certainly put themselves front and centre with those who tuned in … and impressed … based on HIS performance and rhetorical offerings.

The task, however,  facing Horgan and the NDP now is different for the rest of the campaign.

To have a chance at claiming victory when the scorecards are tallied May 9, they must not only continue their fight against Clark and the Liberals, they also have to turn voters’ attention to any weaknesses and/or dangers in specific Green policies, radical ideas and added tax burdens the Greens would actually impose if in power …. or push for as Opposition.