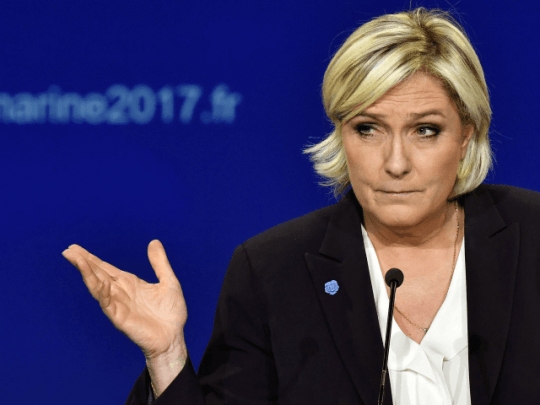 French presidential frontrunner Marine Le Pen has criticised the Pope for pressuring Western countries to open their borders to migrants, accusing him of asking states to disregard their own citizens.

In an interview with La Croix International, the leader of the Front National chided Pope Francis for asking “that states go against the interests of their own people by not placing conditions on the acceptance of significant numbers of migrants”.

The 48-year-old added that, in her view, the Argentine cleric’s pronouncements on immigration exceed his role as a religious leader.

“To me, this falls within the realm of politics and even interference, since he is also a head of state.”

Pope Francis is technically a foreign leader as Sovereign of the Vatican – a walled city-state with some of the strictest immigration and citizenship rules in the world.

Asked about her own religious views, Ms. Le Pen said: “I have a strong faith and I am fortunate in that I have never doubted it.

“However, I admit that I am angry with the Church because I think that it interferes in everything except what it should really be concerned with,” she added.

Ms. Le Pen also discussed a potential showdown with in the second round of the French elections with Emmanuel Macron, a centre-left politician in the mould of former British Prime Minister Tony Blair.

“I have always said that I’d like to be up against Emmanuel Macron in the second round because then the choice will be clear-cut,” she said.

“He is an unashamed globalist who wants to speed up the total opening of borders, free-exchange, and the evisceration of France in favour of private and financial interests.

“I, on the other hand, propose a return to the nation-state, the most effective structure to ensure security, prosperity, and democracy, and to protect our identity.”