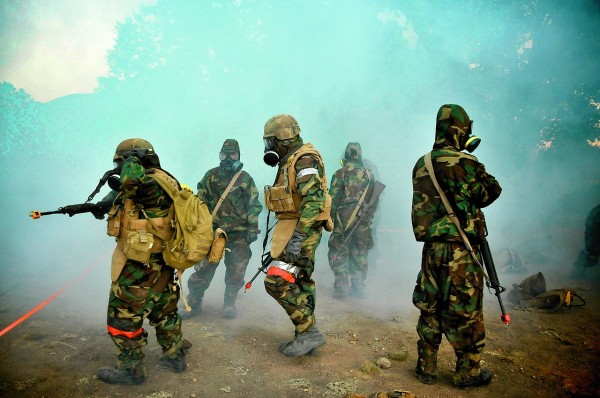 (Natural News) America has become a zombie nation of hypnotized, socially-obedient conformist who are so disconnected from reality that when the bombs start falling, they won’t have any idea how they’ve been programmed to celebrate it all. Heavily dosed with medication, fluoride and heavy metals in vaccines, the American masses have become sleepwalking automatons… conformist consumers of hilariously fictional propaganda parading around as “real news” on CNN, which has now resorted to displaying staged photos of maimed children to invoke the necessary reactionary emotional support to demand WAR.

Yet the snowflake zombies who pretend to be interested in global justice for children have no idea how they’re being insidiously manipulated. They don’t even really know what war looks like. They’ve never lived through war, witnessed war or dealt with the aftermath of war. And they’ve never, of course, been bombed with nukes or blown to pieces by a Tomahawk missile, so the physical reality of all this seems hopelessly remote to them all. “War” is something that happens to other people in far away lands, they believe, not here at home among the snowflake social justice Zombiellenials at UC Berkeley.

It is with this sense of sheer oblivion that the American masses are sleepwalking toward World War III. Even as Russia has mastered the development of Mach-nine cruise missile “ship destroyer” missiles while China is deploying satellite killing ground-based laser systems that can take out most of the military logistics infrastructure in mere hours, the American people live out their days under the delusional impression that nothing bad can ever happen here. This is America, after all. Nobody bombs us! WE do the bombing to THEM, not the other way around.

The American masses are oblivious to how they’re being manipulated

America is a deluded nation obsessed with celebrity fashion, sports, food, entertainment and recreational drugs. Almost nothing that passes through the minds of most Americans is rooted in reality. It’s all twisted narrative, social conformity and sheer delusion pretending to be “fact-checked” news. So as the world marches toward a global nuclear conflict with very real consequences, the average American “consumer” — that’s the most accurate term at this point for the mindlessness of the masses — is far more easily swayed by the photo of a chemical weapons-damaged child than by the physical facts involving hydrogen bombs and the half-life of radionuclides. The idea that America’s present actions could lead us to a nuclear conflict that might make vast regions of America uninhabitable for three centuries has never occurred to the common person.

The rest of us — that’s you and me — therefore find ourselves living among a global suicide cult called “humanity,” where the delusional mob celebrates the very actions that are leading us toward global nuclear disaster. “Washington’s military attack on Syria is unambiguously a war crime,” writes Paul Craig Roberts, a former Reagan administration official. “It occurred without any UN authorization or even the fake cover of a ‘coalition of the willing.’ Washington’s attack on Syria occurred in advance of an investigation of the alleged event that Washington is trying to use as its justification. Indeed, Washington’s story of Syrian use of chemical weapons is totally implausible. All chemical weapons were removed from Syria by Russia and turned over to the US and its European allies. Syria has no such weapons and has no reason to use them and every reason not to.”

The provocation has already thrust America into an escalation that risks an outbreak of global nuclear war. Via Zero Hedge:

A statement issued on Sunday by a joint command centre consisting of forces of Russian, Iran and allied militia alliance supporting Syrian President Bashar al Assad said that Friday’s US strike on the Syrian air base crossed “red lines” and it would “respond with force” to any new aggression while increasing their level of support to their ally.

Meanwhile, tech giants like Facebook are so committed to the total destruction of the human race that they’re now banning sharing of most posts across the entire independent media, banishing any ideas that question the laughably fake narratives of the status quo. What’s left on the table for online consumers to swallow is nothing more than mainstream fake news, the purpose of which is to keep the zombies spoon fed with enough emotionally-charged propaganda so that when war is unleashed, they’ll cheer.

WAR as the ultimate cover story for the coming financial collapse