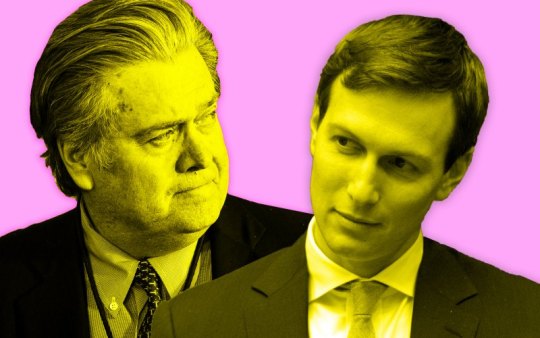 Donald Trump’s chief strategist Stephen Bannon has called the president’s senior advisor and son-in-law Jared Kushner a “cuck” and a “globalist” during a time of high tension between the two top aides, several Trump administration officials told The Daily Beast.

The fighting between Kushner and Bannon has been “nonstop” in recent weeks, according to sources who spoke on condition of anonymity. It’s been an “open secret” that Bannon and Kushner often clash “face-to-face,” according to senior officials.

One official said Bannon has lately complained about Kushner trying to “shiv him and push him out the door” and likened him to a fifth column in the White House.

“[Steve] recently vented to us about Jared being a ‘globalist’ and a ‘cuck’…He actually said ‘cuck,’ as in “cuckservative,’” the administration official told The Daily Beast.

Bannon is a self-described “nationalist” and long-time Republican, while Kushner was, until his father-in-law ran for president, a lifelong liberal and a Democratic donor.

“There’s a big fight [going on],” one senior official said. “It’s all about policy. There’s tension [between them] on trade, health care, immigration, taxes, [terrorism]—you name it.”

The White House and Bannon did not respond to emails seeking comment.

One senior Trump aide said that Bannon was also frustrated with Kushner “continuing to bring in Zeke Emanuel to discuss health care options,” for instance. The aide said Emanuel has had three White House meetings, including one with Trump.

In 2009, conservatives called Emanuel “Dr. Death” for advocating for end-of-life consultations during the crafting of the Affordable Care Act. (He is also the brother of Barack Obama’s former chief of staff, Rahm Emanuel.)

“Steve thinks Jared is worse than a Democrat, basically,” another official close to Bannon said. “[Steve] has a very specific vision for what he believes, and what he shares [ideologically] with Trump. And he has for a long time now seen [Jared] as a major obstacle to achieving that.”

Bannon was removed from his post on the National Security Council on Wednesday. One senior Trump administration official told The Daily Beast on Wednesday morning that Bannon was “only on [NSC] to babysit [Michael] Flynn” because Trump “was losing faith” in Flynn, and that Bannon “never went to meetings.”