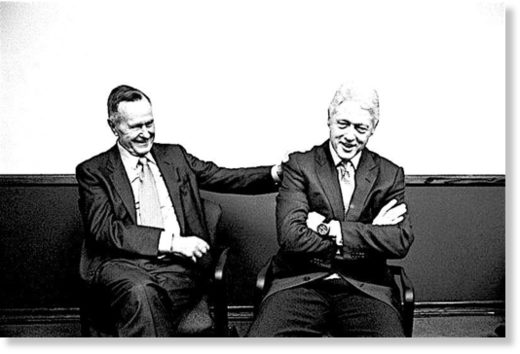 A Walk down the Rabbit Hole of New World Order History

Every day the world seems to be spinning faster out of control. What appears to be unfolding is an epic battle between subversive forces within deep state America vying for dominance and control. Up till now the international crime cabal government led by the ruling elite has enjoyed unbroken, virtually unchallenged power and authority in Washington. The current ruling cabal easily stretches all the way back to the 1980 presidential election, when Ronald Reagan as a figurehead idol on a pedestal covertly secured the real globalist powerbroker into position – his Vice President George H. W. Bush.

That year Reagan beat incumbent Jimmy Carter only because of the October Surprise, a top secret deal overseen by former CIA Director Bush negotiated with Iran’s Khomeini to delay the release of the 52 American hostages in Tehran until after Reagan was elected and became president. Had Carter been able to free the hostages prior to his November election reducing their 444 day ordeal, he would have secured his second term in office. So it’s only by treasonous subterfuge that the puppet occupying the White House changed that year.

This totally sinister pattern already had a precedent when a dozen years earlier Richard Nixon made a secret agreement with then South Vietnamese President Nguyen van Thieu to sabotage peace talks with North Vietnam that President Johnson had been negotiating, convincing Thieu to hold off from signing any peace treaty in 1968 on a broken promise of a better deal to come. This subversively treasonous ploy won Nixon the presidency, extending America’s then longest running war another four plus years, killing 22,000 more American lives and over a million more Southeast Asians. But hey, what does it matter to the ruling elite that has only contempt for human life while deciding who becomes president every four or eight years? The planetary rulers control both political parties in America and regularly take turns selecting the Republican or the Democrat who comes to power as they see fit. Illegal secret deals determining who the White House puppet will be are just how the diabolical game is played. And the game’s been rigged for many decades.

The globalists historically prefer selecting a president with the full card carrying elitist credentials, a member of multiple private inner clubs like the Council on Foreign Relations, the Trilateral Commission, the Skull and Bones Society, Committee of 300 and Freemasonry becomes the bona fide inductee into the satanic hall of shame – the New World Order’s Illuminati. And the elite’s George H. W. Bush had every credential covered as a lifetime secret society member possessing all of the above. The son of a US senator and confirmed financier to Hitler, it was a young George Bush as a CIA operative who’d worked closely with the anti-Castro-turned anti-Kennedy Bay of Pigs Cubans. It was also George Bush who was photographed in front of the Dallas bookstore depository on the very same day that JFK’s brain got splattered on his slow moving, “sitting” target in November 1963.