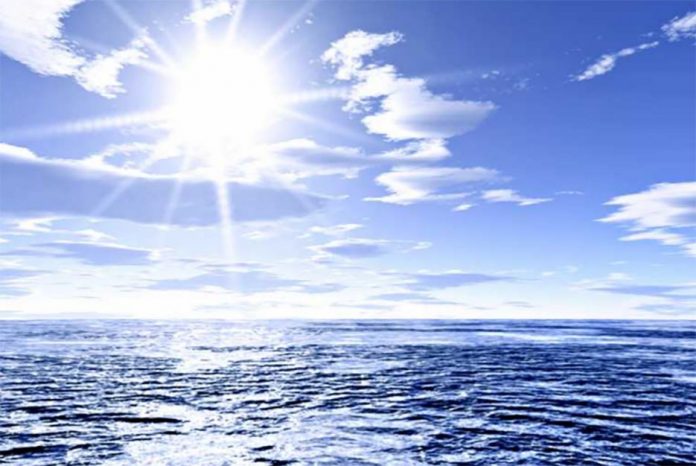 Scarcely a day goes by without us being warned of coastal inundation by rising seas due to global warming.

Why on earth do we attribute any heating of the oceans to carbon dioxide, when there is a far more obvious culprit, and when such a straightforward examination of the thermodynamics render it impossible.
Carbon dioxide, we are told, traps heat that has been irradiated by the oceans, and this warms the oceans and melts the polar ice caps. While this seems a plausible proposition at first glance, when one actually examines it closely a major flaw emerges.

In a nutshell, water takes a lot of energy to heat up, and air doesn’t contain much. In fact, on a volume/volume basis, the ratio of heat capacities is about 3300 to 1. This means that to heat 1 litre of water by 1˚C it would take 3300 litres of air that was 2˚C hotter, or 1 litre of air that was about 3300˚C hotter!

This shouldn’t surprise anyone. If you ran a cold bath and then tried to heat it by putting a dozen heaters in the room, does anyone believe that the water would ever get hot?

The problem gets even stickier when you consider the size of the ocean. Basically, there is too much water and not enough air.

Let’s put this amount of energy in perspective. If we all turned off all our appliances and went and lived in caves, and then devoted every coal, nuclear, gas, hydro, wind and solar power plant to just heating the ocean, it would take a breathtaking 32,000 years to heat the ocean by just this 1˚C!