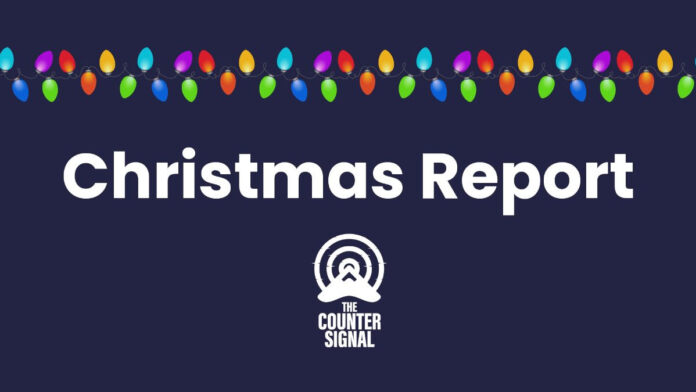 This year has shown us one thing: Justin Trudeau can be beaten.
I know that recent years have been tough for Canadians, and after eight years of the far-left Trudeau government in Ottawa, it can often seem like things are only going in the wrong direction.

But I have good news for you, and it is news that Trudeau and his mouthpieces in the government-funded media don’t want you to think about. All our work to fight back is making a difference, we are starting to win again, and the Trudeau regime realizes their time in power is ending.

Because of independent media like The Counter Signal, more Canadians are beginning to learn the truth. We owe it to our dedicated supporters like you that we can do our work to bring Canadians the stories that the mainstream media won’t.

We hold a unique place in the Canadian media landscape. We balance our ruthless appetite for truth and honesty with professionalism that some others lack. The response to this fresh approach has been overwhelmingly positive, and we’ve made a more significant impact than I ever expected.

Thanks to your support, we have become one of the fastest-growing conservative news outlets in the world, and I want to take this opportunity to share some of the progress we have made.

Our first year in 2021 was good, but our impact was even bigger this year. We have seen a 300% increase in traffic on our website, with nearly 10 million views this year.

We have published more than 1000 articles since the beginning of the year, bringing increased coverage to the most critical issues.

We have also increased our social media reach with a follower increase of nearly 400%.

In addition, impressions on our stories via Twitter have hit half a billion views.

To help us deepen our impact, we have expanded The Counter Signal family with more journalists contributing to our work. You may have heard from our reporters Mike Campbell and Rachel Emmanuel, both tireless freedom fighters who are knocking it out of the park every single day.

Our growth and impact are exciting news for us, and I hope you also take some pride in it – as we would not be making this impact without you. The critical stories we have broken this year are reaching more people than ever and making a real difference.

Make A Christmas Donation
We were there with the Freedom Convoy from the very beginning when they set out from Western Canada. I broadcasted those cold winter days in Ottawa to the world as truckers made clear to Trudeau that they would never surrender their freedoms to a tyrant. We documented every moment, and the world watched in awe.

Our convoy coverage was only matched in reach by our time in the Netherlands when we took our news studio international and were the first media in the world to be accredited and on the scene of the Dutch Farmer Uprising.

The elites and the World Economic Forum thought their anti-nitrogen agenda would go unnoticed, but we made sure that people around the world saw the courage of the Dutch farmers who were resisting it.

The connection that Canada shares with the Netherlands is deep and historic. From the days of Nazi liberation to 2022 – Dutch and Canadian freedom fighters have been inspired by one another. We documented Dutch farmers saying precisely that, and the news swept like wildfire across the globe. It was my favourite story of the year, without a doubt.

Tens of millions read and watched our coverage on Twitter, Fox News, and of course, at TheCounterSignal.com.

The Dutch farmers also taught us to keep a closer eye on our own government. We did that by exposing Trudeau’s plans to militarize and build a new armoury for his nitrogen-hating climate cops in Winnipeg.

With coverage as strong as this, you might understand why, unlike the Trudeau regime media, we have never taken a government subsidy, and we never will.

While building a news outlet this way is tough, we won’t take government handouts or make buffoons out of ourselves to clickbait our readers. The matters we cover are serious and need serious journalists to tackle them.

And one last note: while we publish thousands of stories and millions of words each year, we get some things wrong now and then.

I am committed to you that we will always correct the record and be honest with you, our friend and reader. We won’t sweep mistakes under the rug like the CBC; instead, we learn from them.

We sincerely appreciate all the support you have provided us in 2022, and I hope we can count on your continued help as we head into 2023.

We must keep fighting against Trudeau’s latest attacks on farmers, gun owners, and anyone who disagrees with him.

Next year we will also be crucial in Alberta, as we will be fighting against the Media Party as they try to resurrect Rachel Notley from her political grave.

If you can, please go to www.thecountersignal.com/christmas to help us get ready for next year.

Even $25, $50 or $100 can be the kind of game-changing help that supports the hard-hitting coverage that you saw from us this year. In addition, if you can make your gift recurring on a monthly basis, it will make it easier for me to reliably hire and pay good journalists who are up to the task.

From the team here at The Counter Signal, we want to thank you again and wish you and your family a very Merry Christmas and a Happy New Year.

P.S. Recurring donations help me know exactly how many journalists I can hire. Every little bit helps.

P.P.S. Please keep an eye out in the coming days for our 2023 survey, where we will be asking our most loyal supporters what they like and what they want to see more of. Thanks Michael.