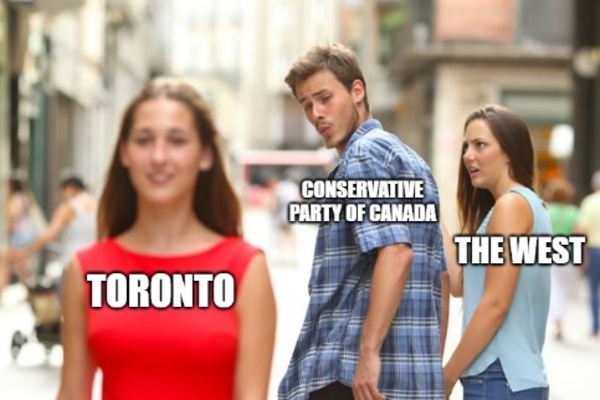 If Wexit continues to grow, the federal Tories have chosen the worst possible time to pivot their attention to Toronto.

Canada’s federal Tories are looking for a new direction for the 2020s. The party brass has announced that they will select a new leader on June 27 at a convention in Toronto. Yes, the Toronto where the Tories also selected their last leader. The decision to keep the convention in Toronto is symbolic of the party’s desire to “broaden the tent” by appealing to the vote-rich urban centres. They obviously need to do this, but if they are not careful, the party risks further alienating the West and undoing whatever little inroads they could ever hope to make.

First, let’s look at how we got to this point. Now that outgoing party leader Andrew Scheer has been thrown to the wolves, many among the party faithful seem to be clamouring for a major change in direction. Playing it safe was the old strategy that got Scheer to the leadership back in 2017, as the candidate preferred by the party’s establishment. After a decade of power under Stephen Harper, the party had hoped to repeat their success by choosing a “Harper with a smile.” Even Scheer’s federal election campaign looked like a re-run from the Harper years, offering voters a few micro tax credits and hoping that the latest bout of Liberal scandals would allow them to sail through to Ottawa. It was an uninspiring strategy, perhaps, but it had worked before.