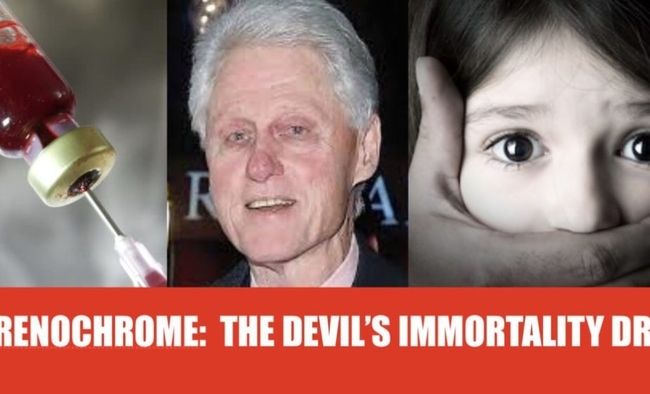 Previously relegated well beyond the awareness and understanding of the general public, a naturally occurring human endocrine secretion is becoming a focal point of attention of people awakening to the broadening Jeffrey Epstein scandal and the tectonic realignment of human perception lurking beneath the surface of that legal proceeding and its connotations for the reality of the greatest evil in our time: child sex trafficking, ritualized sex abuse of children and child sacrifice.

That rare substance is called Adrenochrome. And aside from having near miraculous scientifically tested regenerative abilities in rejuvenation of human tissue, restoration of nerve responsivity and cognitive function, adrenochrome holds near mythic status as the Calistoga “fountain of youth” immortality substance for the global elite. The Unholy Grail of the Luciferian pedophile cultists who rule and reign in our midst. Adrenochrome harvest and acquisition is the WHY of everything else in the emerging and pernicious realm of unspeakable acts of child sex trafficking, abduction, abuse exploitation and even child sacrifice by the world elite. And it’s all coming out.

Adrenochrome is the powerful hormonal precursor for adrenaline secreted by the body in large amounts in moments of intense fear, anger or perceived life threatening danger. It’s purpose, as determined by scientists is both to optimize the adrenaline response of muscles and nerves of the body while also protecting bodily tissues and organs from the rigors of adrenaline rush, acting as both buffer and optimizer to accelerate the adrenalized flight or fight mechanism of human fear response in survival situations. Think of it as a fuel additive for the souped-up “funny car” launch of human survival instinct when confronted by life threatening physical danger or terror. And there’s nothing like it on earth.

While much of the clinical testing and conclusions of published research surrounding adrenochrome, also known as “Pink Adrenaline,” or oxidized adrenaline, has been hidden from public view, a number of published studies quantifying the basic properties and capabilities of the substance are in the public domain. Very quickly, scientists discovered the power of adrenochrome to turn back the clock in restoring youthful function of the human body, especially nervous system and glandular functions that determine the rapidity of the aging process. In repeated scientific study, adrenochrome has been shown to be a virtual fountain of youth for the optimization and maintenance of human tissue against the onset of aging.

The Miracle of the Rabbit’s Ear

In one noted Belgian study published in 1946, clinicians were able to use a perfusion of aqueous adrenochrome to bring an intentionally frostbitten rabbit’s ear back to life with only a few exposures, allowing doctors to restore vascularity and nerve stimulus response to previously necrotized tissue. After rendering the rabbit’s ears nerve damaged and deadened intentionally four weeks prior to experimentation, doctors then proved a hypothesis that the application of oxidized adrenaline or Adrenochrome had the capacity of restoring nervous response to stimulus in the rabbit’s damaged skin. The findings spurred the practice of applying subcutaneous adrenaline to incision sites of surgical patients in order to hasten nerve regeneration and healing.