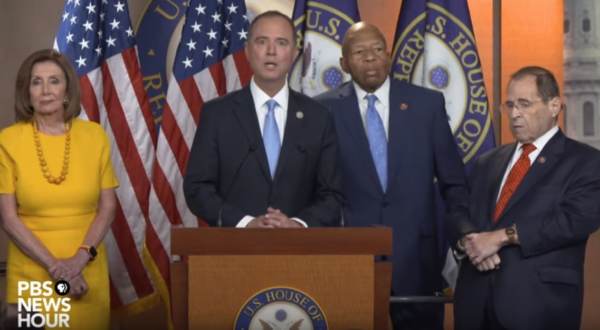 Talk about lawless? The power-hungry Democrats believe they can impeach a sitting president over a completely innocuous call to a foreign leader.

The power-mad Democrats think they can do this based on a anti-Trump CIA “whistleblower’s” second hand account that has already been widely discredited.

And, the power-mad Democrats believe they can impeach the president by holding hearings in backrooms and by leaking only tidbits to the American public.

These people are insane if they they think they can pull off this stunt on the American public!

Now this…
Sunday on Face the Nation shifty Adam Schiff said Democrats may not call in their far left CIA leaker to testify.

President Trump: Adam Schiff now doesn’t seem to want the Whistleblower to testify. NO! Must testify to explain why he got my Ukraine conversation sooo wrong, not even close. Did Schiff tell him to do that? We must determine the Whistleblower’s identity to determine WHY this was done to the USA. Democrat’s game was foiled when we caught Schiff fraudulently making up my Ukraine conversation, when I released the exact conversation Transcript, and when Ukrainian President and the Foreign Minister said there was NO PRESSURE, very normal talk! A total Impeachment Scam!